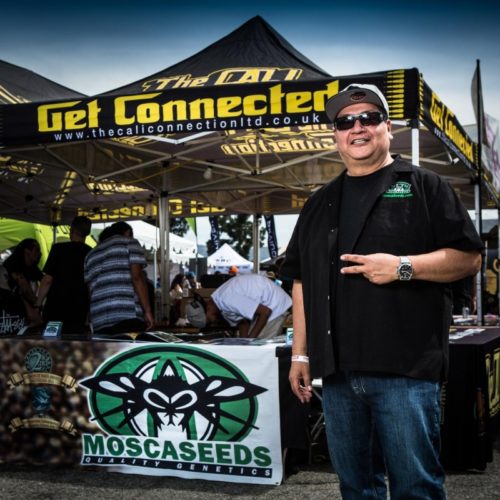 Mosca’s first encounter with cannabis was one of fate and destiny.  At the early age of 11, Mosca was visiting family in the farming community of eastern Iowa.  This early exposure to cannabis began in the tomato and corn fields where 16-20 foot tall hemp plants thrived.  These hemp plants were decedents of plants used many years before when the U.S. government encouraged farmers to grow hemp for utilitarian purposes such as rope.  It was this early exposure that began Mosca’s love for this incredible plant. And why, to this day, Mosca’s Vision is “To preserve and protect Cannabis Cultivars for future generations…”

Fast forward to Mosca’s early 20’s, when he began reading books such as Marijuana Botany by his idol, Rob Clarke ( who is now a personal friend), Ed Rosenthal, and Mel Frank. He even searched university journals for any articles on growing cannabis which could help him learn more about this anomaly plant.  During the summer months Mosca worked at a progressive orchid farm that had greenhouses and tissue culture facilities.  It was here, where Mosca learned first hand about plant husbandry, care for plants, and understanding how to grow many types of plants.

Several years later, during one of Mosca’s many trips to Amsterdam, he met Gerrit Slot, head breeder and owner of Magus Genetics.  They instantly connected as they both shared the same passion and love for the cannabis plant.  They became great friends and this is when Gerrit became a mentor for Mosca.  From this friendship, Mosca went from being a good grower to learning many of the finer aspects of growing Award Winning plants.  In fact, Mosca won 3 Awards in Amsterdam collaborating with Gerrit.

Mosca’s next career milestone came in when he first grew Cinderella 99.  He immediately made a spiritual connection with this cultivar and never wanted to lose her.  And wanted to preserve Cinderella 99 for the future.  Gerrit began teaching Mosca the Dutch-style approach of plant selection and breeding.  While undertaking a large geno selection of hundreds of seeds and working with 5 families of Cinderella 99 seeds that came directly from Bros Grimm original seed stock, Mosca was able to identify and isolate the famous “Pineapple” pheno.  One of the most sought after plants at that time.  To share the love, Mosca decided to donate seeds to one of the online boards.  In 2007, the response was so overwhelmingly positive that Mosca Seeds was created.

All Sessions by Rick AKA Mosca Negra